Had a great time this week with leading 4 classroom workshops and 2 field trips at Galveston’s FeatherFest.  The first field trip was at Bolivar Flats, which I kind of know like the back of my hand.  The goal was to give the participants experience at using a ground pod and to get some low-level shorebird photos.  Bolivar is at it’s best at low tide and of course it was high tide on Friday morning.  Never the less, we packed 10 of us into a small van and headed to the flats.  Note to self:  get a larger vehicle next year and leave earlier.

The good news was that the sun was out and the wind and waves were low.  The bad news was that with high tide, there were no exposed sand bars off of the shoreline so we had to stay on the beach.  There were several Pelicans on the poles at the barricade, which made for some good shots including silhouettes.  Went a little further down the beach and saw a Willet and some type of small sparrow in the brush.  Got down on the ground to shoot some small Sanderlings and 3 Marbled Godwits came walking towards us.  It was a good example of how close the birds will come to you while lying down on the ground.

We ended up working our way down the beach and got up and down several times.  My sharp-eyed liaison assistant, Phil, spotted a lone Avocet in full breeding color mixed in with some other birds further down the shoreline.  I told the group that it would be a miracle to get close to him but we would give it a shot.  We ended up walking closer to him with my goal to get to a point where there was some yellow plastic on the beach.  The birds started to stir a little, so we went down to the ground.  The Avocet was mixed in with several other birds and was difficult to get a good shot of him at that distance.  We ended up doing the old belly crawl trying to get closer while pushing the ground pods along.  When we made it to the yellow plastic, I was satisfied that we had reached that goal.  My group was very ambitious and wanted more so we kept crawling.  This is where a Skimmer ground pod really shines with it being easy to move along the sand.

We ended up crawling fairly close to the Avocet but ran out of time and had to head back to the van.  I was hoping that he would give us a good stretch and fly but he looked too tired.  It’s rare to see a lone Avocet like that as they are usually in a large flock.  The field trip turned out better than I expected with being stuck on the shoreline.

Thanks to everyone who came on this field trip.  It was a good time and can’t wait to do it again next year.  I’ll post of few more photos from this trip and my second trip on Sat. around Galveston later.

Marbled Godwits with my goal while taking this shot was to get the first two with their beaks together.  Got an added bonus with the 3rd one.  Shows the depth of field with a 500mm lens. 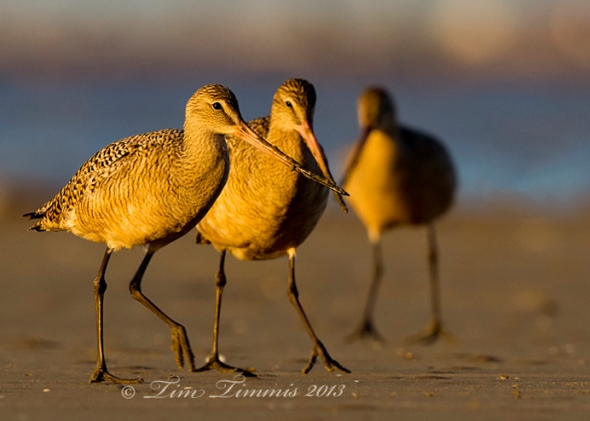 Got this Marbled Godwit taking off as he walked around us along the beach.

This Marbled Godwit was doing his best pose for us.

Our targeted Avocet in full breeding colors as he finally walked away from the other birds around him. 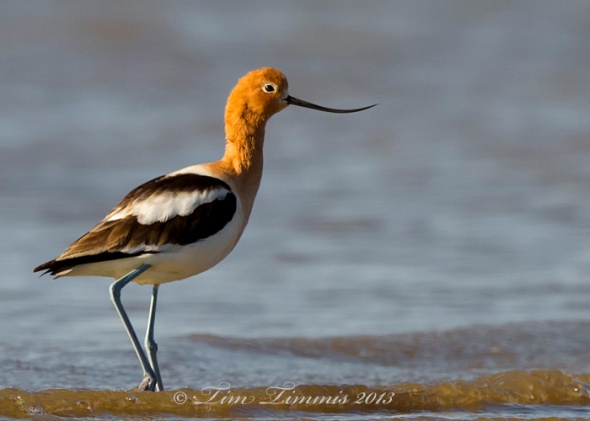 This entry was posted on April 14, 2013 by Tim Timmis. It was filed under Birds and was tagged with Bolivar Flats, Canon 500mm F4 IS II, Canon 7D, Galveston's FeatherFest, Skimmer ground pod, Wimberley II.