Patience pays in wildlife photography from stalking your subject to waiting to upgrade your equipment.  After 6 years of using my Canon 100-400 lens, I finally got the new Canon 500mm F4 IS II lens. It was pre-ordered from B&H back on May 28th and arrived on August 1. Of course I took the next two days off of work to test it out in the field. I’ve been dreaming of getting a 500 for six years so I wasn’t going to waste any time just looking at it. Also got the 1.4 EX III teleconverter and the full Wimberley head.  I love my 100-400 and have had good success with it but it was time to crank it up a few notches and expand my horizons with a longer, higher quality lens.  The following first impressions are based on using the 500 on my Canon 7D camera.

After I almost hugged the UPS guy who delivered it (I said almost), I ended up taking the stereotypical photos of unboxing the lens, just because it’s the law.  Next steps involved taking comparison photos of it alongside my trusty 100-400 and putting on the camo lenscoat. I felt bad for my 100-400 as it now looks very puny in comparison. It has big time lens envy.  Cheer up little buddy, you will still be my go-to lens for airshows. 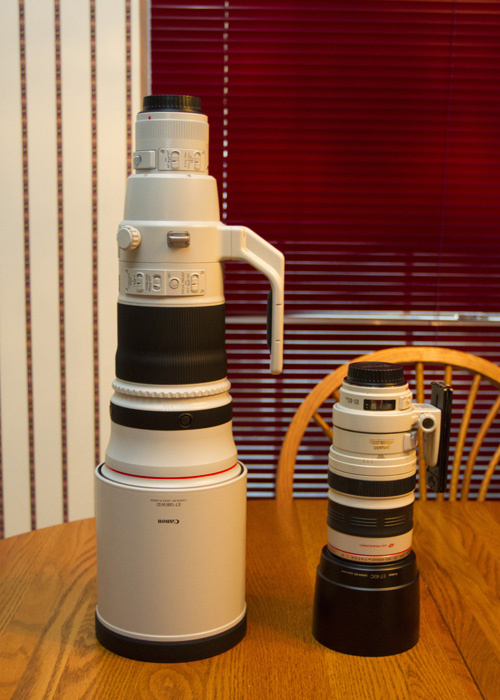 My first impression, other than it’s much larger than my 100-400m (well duh), is that it feels lighter than I expected.  I knew that they had reduced the weight by 1.5 lbs from the previous version but it seemed very light compared to the size.  Getting the lenscoat on the lens took a few minutes to get all of the pieces in place. Looks and feels great. I replaced the lens foot with a RRS replacement foot which is lower profile and lighter.  I then mounted the lens on my new Wimberley head to see how it worked before heading out the next morning. The full Wimberley head works great and feels much smoother than the Wimberley Sidekick gimbal mount that I was using with the 100-400 lens.

Headed out to Brazos Bend State Park before sunrise.   Got my gear assembled in the parking lot and headed down the trail with my tripod slung over my shoulder, asking myself did I get everything tightened down well enough?  Although the new lens is lighter than its predecessor, it still weighs 7 lbs and is much heavier than my old lens.  Definitely could feel the weight difference on my shoulder.  I left the flash off as my new flash bracket section to attach to the Wimberley head was going to be delivered that day.

My first subject was a Green Heron. First impression of the lens in action was that the focus is very quick and F4 is going to be great compared to F5.6 of my old lens. Getting decent shutter speeds that early in the morning is going to open up some possibilities that I didn’t have before. The Green Heron wasn’t doing much so I moved on.

Next stop along the trail found several juvenile Purple Gallinules walking around in a group of lily pads. Had some initial issues with trying to find the subject with the longer fixed lens compared to my 100-400. When I looked through the lens for the first few times, the birds were always above where I was initially aiming, although it didn’t take long to get used to that.

Moved down the trail and found 8 juvenile Little Blue Herons fishing. That gave me a chance to practice action and flight shots with the new lens. I ended up not attaching the 1.4x teleconverter as the birds were too close to use it, which is a good thing. Didn’t have any problems using the new lens while keeping up with the action. It felt very natural and easy to maneuver on the Wimberley head. Could track the birds in flight without any problems.  Caught a couple of whistling ducks doing a fly by and quickly locked focus on them.  Had the usual challenges with keeping the white birds properly exposed with changing light conditions but no issues with the lens.  Had to use the manual zoom feature of the new lens, i.e. my feet, a few times when the birds were too close.

Ended up spending about 2.5 hrs at Brazos Bend the first day and my first impressions were great however, more practice and testing would be required.  Good excuse to go out the next two days as well. 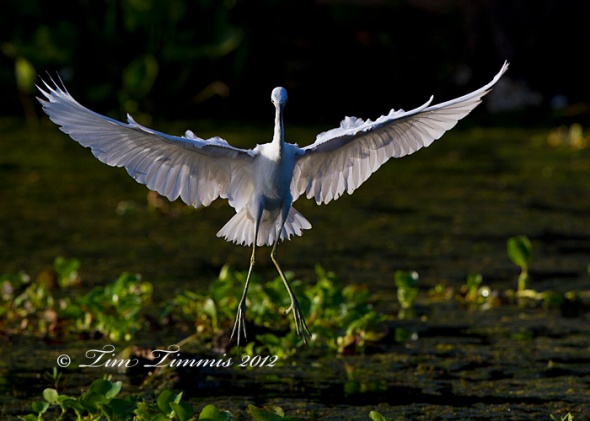 Went back the next day to Brazos Bend to practice some more.  Met Doug at the park to check out his new camera and got a pleasant surprise when Sheldon showed up.  The birds weren’t as cooperative as the day before so I got more hiking in and my shoulders felt it by the end of the trip.  We did come across a somewhat stubborn Alligator lying near the trail that didn’t want to move.  He did open his mouth a few times for some decent shots and gave me the opportunity to take the lens off of the tripod and tried lying down on the ground with it to get some full frame eye level gator shots.  It balanced fairly easily on my elbows.  Wouldn’t want to do it for a long period but it worked fairly well.  Made me want to head to the beach to try out the lens with my ground pod, which was on the agenda for the next day.

I did attach the 1.4X III teleconverter but didn’t use it much as the birds were too close to effectively use it.  First impressions are still pending on the teleconverter.

Headed to Galveston Island to break in the lens properly with some sand and salt water at the Gulf of Mexico.  Went to East Beach near the jetty and broke out the ground pod.  Wanted to go to Bolivar but high tides in the mornings this time of year make Bolivar an unattractive option for low-level photography.  Not much was happening at East Beach each except for a few Willets near the shoreline.  Laid down for about ½ hr on top of some piled up dead seaweed to try out the lens with the Wimberley head mounted on my Skimmer ground pod.  The combo worked great.  This is where the lens will really shine for me with the narrow depth of field and better blur on the backgrounds.  The narrow depth of field with this lens will take some getting used to.  I used to shoot my 100-400 wide open most of the time at F5.6.  Can’t shoot everything at F4 or the bird may not be in focus over his whole body, depending on how close that he is.  It will take some practice to get used to the required settings to use for different situations.  The challenge with using a ground pod is that it’s difficult to keep it level so you have to level the shot in the camera view finder by loosening the tripod collar knob and manually rotating the lens to the level position.  It takes a little more effort doing it with the larger lens than with my 100-400 lens.

After shooting from the prone position, got up and wandered down the beach to try out some hand-held flight shots.  Again, the lens focused very quickly and worked well.  It is definitely hand holdable but I wouldn’t want to do it all day.  Had no problem holding the lens for about ½ hour while shooting terns and pelicans.

Left the beach and headed to the Texas City Dike looking for black skimmers that were nesting there last year at this time.  No skimmers around but ended up finding a couple of cooperative American Oystercatchers at the dike and shot them out the car window while hand holding the lens.  One was walking along the edge of the dike on the rocks so I followed him with the car.  Got nearly full framed shots.  The light wasn’t ideal but it was a great opportunity to try out the new lens.  Note to self:  put your beanbag back in the car.

This entry was posted on August 7, 2012 by Tim Timmis. It was filed under Birds, Equipment, Wildlife and was tagged with Alligator, Canon 100-400, Canon 500mm F4 IS II, purple gallinule, Willet.