Tales from the whales…the Monterey Bay, CA whale watching trip was awesome.  The day started early with leaving the hotel in Morro Bay at 5:00 a.m. so that we could get to Monterey Bay in time to catch the boat.  There were +/- 30 to 40 people on the boat along with a couple of dogs (?).  More to come on the canines.  It was a cloudy/foggy/hazy day which wasn’t a bad thing as the sun would have been pretty harsh for photography at mid day.

The best advice from our photographer guide, Bill,  was that I shouldn’t take my 500mm lens as the whales would be too close.  To be honest, I didn’t believe him but luckily took his advice and used my trusty 100-400mm lens.  We sat at the back of the boat and headed out to sea towards the continental shelf where the whales like to feed.  Killer whales had been seen in the area recently so we were hoping for the best but I wasn’t convinced that we would see anything.  My previous whale watching experience was limited to on-shore spotting from Palos Verdes, CA which was always a bust.

On the upper deck of the boat where the captain was, they had a naturalist that would tell us where the action was happening and give some detailed information about the wildlife that we would see.  They also had a dog up on the upper deck, which was a little strange in my opinion.  During the trip off shore, the naturalist didn’t have much to talk about except a few birds flying around.  The boat was bouncing around too much to try to get a decent shot so I stayed put in a seated position.  Finally she spotted a whale off of the right side of the boat so everyone moved in that direction.  I could see a whale with his head sticking straight up out of the water but wasn’t able to get in position quick enough and got a blurry shot, bummer.  At least we had spotted one I thought.  My hopes started to rise.  It was a Humpback whale and we ended up spotting a few of them with 2 getting very close to the boat.

It was like roller derby when they would call out a whale sighting at different positions and everyone was quickly moving from side to side on the boat.  It would have been fun to stand at the back of the boat with a wide angle lens and take pictures of all of the people trying to run back and forth on a bobbing boat.  My 100-400 lens was small enough that it was fairly easy to manuever around with it.  I would lean up against the railing with my body to try to stabilize myself while shooting.  Had to grab the railing a few times as the boat was rocking pretty good.  Talking my long lens would have been a major mistake.  Thanks again Bill for the advice.  A very smart man he is.

The whale watching boats communicate with each other to share whale locations and two other boats joined our hunt for the mighty humpback’s.  At one point, the 3 boats were maybe 50 yds apart and we had 2 whales leisurely feeding in between us.  It was an awesome experience.  You could tell by their body position when their tails would be coming out of the water.  Had to zoom out a few times as they were too close at 400m.  My bird photography experience came in handy as  and I ended up being fairly fast on the trigger to get action shots when they surfaced.  Trying to get water spout shots was a challenge as by the time that you got your camera up to your eye, the action was over.  Ended up using my camera like a big point and shoot and just would quickly point the camera in the direction of the spout, focus and shoot.  Ended up getting a few decent shots using this highly scientific method.

Now the fun part of the trip.  Once we slowed to a crawl while taking pictures of the whales, the boat was rocking back and forth big time and much more noticeable than when we were moving at higher speeds.  Well, the motion of the ocean was not a good thing for some people in this case.  We had several people “ralfing” off the sides of the boat.  One guy got really good distance with some good ol’ fashion projectile vomiting but I wasn’t able to get a shot of it.  Would have been a classic.  I turned to the guy standing next to me and claimed that the sick guy was “chumming” for whales.  Sorry, I just couldn’t resist.  Luckily, none in our group got sick.

Now for the stupid part of the trip.  One, highly intelligent young couple, brought their very large dog on the boat.  Now that was a very bright idea.  I ended up having a love/hate relationship with that dog.  On the way off shore, the dog ended up leaning up against my leg while bracing himself to keep from falling over.  I didn’t complain too much as he helped keep my one leg warm.  The intelligence factor came into effect when the dog ended up dropping loads out of both ends before the trip was done.  Thanks people.

Needless to say, I had a great time on this whale watching trip.  Here are some of my whale tail shots.  I’ll post some more shots later. 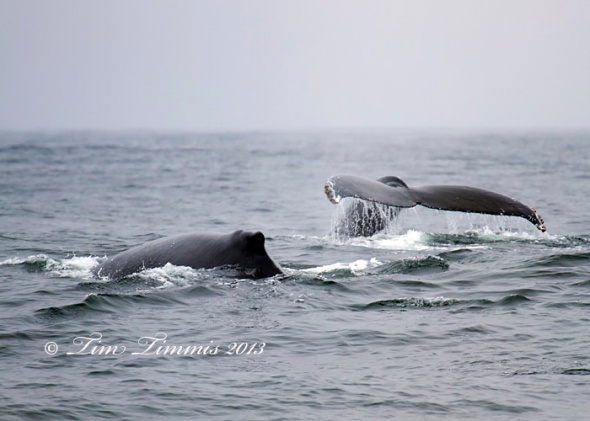 This is a full frame shot without any cropping.  Had to zoom out to get the tail in the frame. 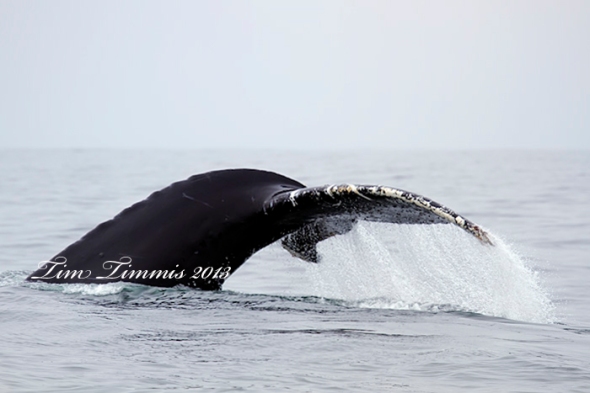 A different angle showing the jagged edge of the tail, barnacles on the tail and a bird flying underneath it. 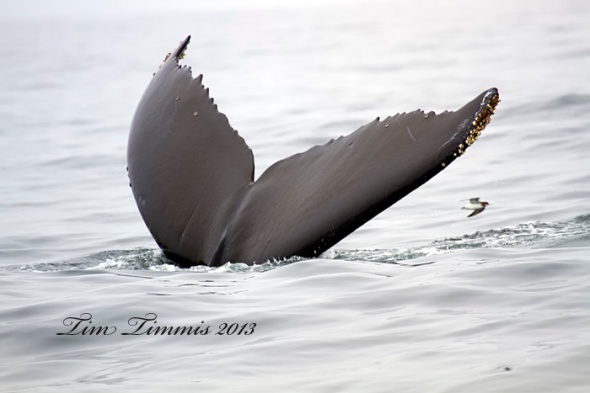 This is my favorite photo from the trip. 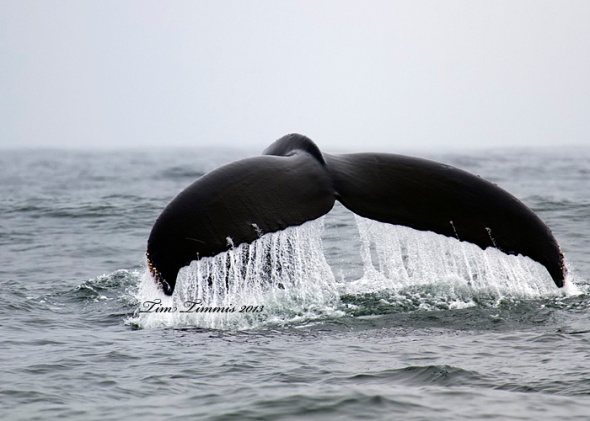