Last Thursday through Sunday was a very busy time for me at Galveston’s Texas FeatherFest.  I led three classroom workshops and three field trips.  This was my 5th year being one of the photography leaders and it was a blast, as always.

My field trip on Saturday started off by catching the 6:00 a.m. Bolivar Ferry.  I met up with my group once we got off of the ferry and they followed me to Bolivar Flats.  It was going to be a sunny morning with low tide so I was hoping that the birds were going to be out.  Reports from the previous day indicated that the tide was abnormally low along the jetty without many birds in that area.  Upon pulling up to the parking area on the beach, I could see that there were some exposed sandbars and what looked like a flock of avocets, which was a major relief.  After we geared up, I gave everyone a quick lesson on how to try to try to keep their hands clean when lying down and getting up and we headed out.

There were two other photographers lying on the beach shooting the avocets so I decided to take my group out on the sandbar so that we weren’t looking into the sun all morning.  We walked through the water to the sandbar without incident, which wasn’t the case on Sunday.  More on that on my next post.

Ended up having the group lay down on the sandbar in a long row so that we wouldn’t be in each others line of fire for photography.  We had 8 participants along with myself and my liaison, who helps me keep track of everyone and gets us back to the headquarters on time.  I had the first person lay down near the water line at the north edge of the sandbar since the tide was supposed to be receding.  Well that theory didn’t work too well as the water level came up later and the first couple of people started getting wet so we had to shift the line to the right, which would have been an interesting video.

The flock of avocets kept walking back and forth across the area between the sandbars, which provided some decent photo op’s.  It’s always a challenge of trying to get one of the birds isolated from the flock.  Decided to get a little closer after a while so we practiced crawling on the sand while pushing our ground pods along.

After the action died down, I had the group rotate 180 deg. so that we could get some photos of willets that were in the water behind us.  Also, I had noticed several groups of avocets and brown pelicans flying by our sandbar and it finally hit me that we should turn around and get photos of them flying towards us.  That turned out to be a great decision as they birds kept coming our way for the rest of the field trip.

Thanks to Richard Howard for being my liaison and to everyone who came out to play in the wet sand with me.  I’m hoping that you had as much fun as I did and got some great photos from a different perspective that what you normally see.

This photo is of the flock of avocets that kept walking back and forth in front of us.

Caught these two avocets that were isolated from the rest of the group.  I’m always looking for how two birds will interact of make an interesting photo together, such as their beaks crossing when coming close to each other, etc.  These two made a cool mirror image of each other.

After we turned around, several groups of avocets flew close to us.  This group was clustered together when I first spotted them and they then spread out as they got closer to us.  The ones on my far right were doing some very cool synchronized flying with common wing positions.

This is the same group 1 second later as they got a little closer. 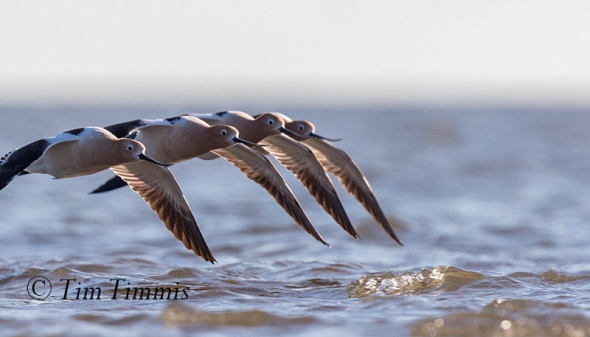 Here are the group photos so that I have evidence that yes, they actually laid down in the wet sand and…

…that they got wet and dirty.  Mission accomplished.

It was a balmy 30 deg before sunrise at Bolivar on 2/5/11 but the birds were still out.  Wasn’t sure what I’d find as my last trip there was a bust for bird shots.  Not many birds near shore before sunrise so I waded out about 100 yds into the gulf while waiting for the sun to come up.  Didn’t want to get wet and cold laying down quite yet.  Got a few blurred flight shots and worked my way west towards the jetty.  Saw a large flock of birds flying around and was hoping for Avocets but it ended up being a few hundred black skimmers.  Tried to get close to them to lay down on a sand bar when the water came up and covered the sand bar just as I got there.  Moved to a different area and laid down to shoot.  Got some skimmer shots and they eventually flew off.

Decided to stay put to see what else would come around.  A flock of Avocets landed near by and they started walking towards me.  Of course my memory card was filling up so I changed it before they got too close, or that was the plan.  After I got the new card in and formatted, looked up and they were right in front of me about 30 ft away.  Didn’t want to take time to put my glove back on so I shot away and got some frozen fingers.  The Avocets ended up being all around me and I got several almost full frame shots.  The challenge with Avocets is that they like to walk around together in groups and it’s tough to get individual shots of them so I’m very pleased with these shots.  Ended up being a great day for bird photography despite the cold weather.  Here’s hoping for 20 deg weather next time!