In preparation for my two field trips that I’m leading to Bolivar Flats during Galveston’s FeatherFest, made a scouting trip to the coast last Sunday.  My original goal was to scout out the area but will have to try that one again as I didn’t get past the parking area due to a flock of Avocets being right there before the sun came up.

Caught this brown pelican doing a fly-by as he passed near the sun.  Was able to see him coming as I’ve learned to shoot with both eyes open, which is one of the tips in one of my classroom workshops that weekend.

Very little cropping on this shot, which made it a little more challenging than normal for a flight shot off of a ground pod with the limited range of motion from side to side.

Here is a link to the FeatherFest website.  We have several great photography leaders with both classroom workshops and field trips.  This will be my 5th year leading my events.  As of a week ago, there were a few spots left on my trips so check them out if interested. 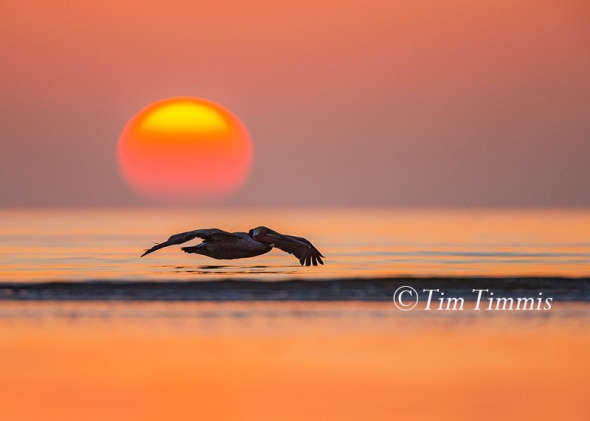 This entry was posted on March 24, 2017 by Tim Timmis. It was filed under Birds and was tagged with Bolivar Flats, Brown Pelican, Canon 1.4x, Canon 1DX, Canon 500mm F4 IS II, Gulf of Mexico, Sunrise, Texas Gulf Coast.