It’s been almost 2 months since I’ve taken any wildlife photos so it felt great to break out the camera again last weekend.  On my way to see the Dow Skimmers in Freeport, TX, headed to Brazoria NWR to check out the action at sunrise.  The NWR had an abundance of water, which leads to fewer photo op’s for shorebirds.  Was hoping for some Wood Storks but none were to be seen at sunrise.

My best luck came on the drive into the refuge when I spotted this Caracara along the paved entry road.  Had to turn around and slowly approach him with my car.  They can spook easily so didn’t want to get too close to him.  Took a few photos and then moved closer.  He checked out his feathers and flew off to another perch.  Tracked him down one more time for the last shot and went further into the NWR.

The sun had not come out yet from behind the clouds so had to crank the ISO up to 3200 to get any decent shutter speeds. Used positive exposure compensation on the first two shots with the bright sky in the background.  Used some noise reduction on the second shot but not on the first and last photo.  It would be very hard to go back to my old 7D.

Taken with Canon 1DX and Canon 500mm F4 IS II with 1.4X III teleconverter, handheld out the car window 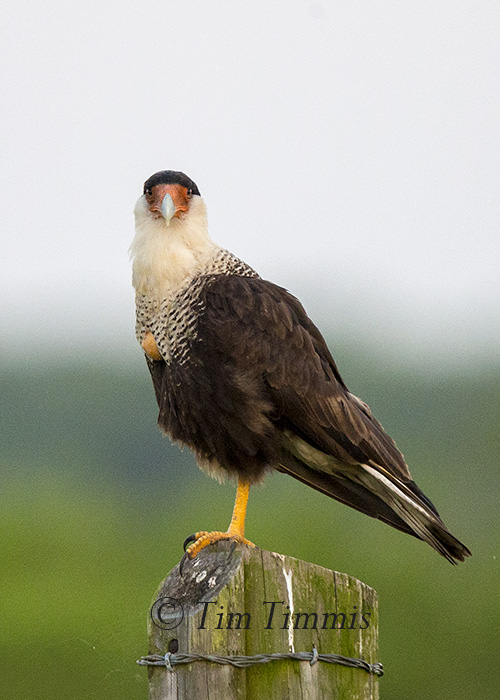 This entry was posted on June 29, 2015 by Tim Timmis. It was filed under Birds and was tagged with Brazoria NWR, Canon 1.4x III, Canon 1DX, Canon 500mm F4 IS II, Caracara, Crested Caracara.