My goal is always to get up close and personal with wildlife but this encounter was a little too close for comfort.

While taking my usual early morning tour of the Indiana countryside while on vacation, I rounded a corner while looking off to the left in a large field to see if any Sandhills were waiting for me.  No luck on the left but suddenly caught a glimpse of something coming quickly from my right and three Sandhill cranes were flying right in front of my car.  I locked up the brakes on the dirt road and missed them by a couple of feet at most.  My reflexes are apparently still in tact as I was able to quickly hit the brakes and grab my camera on the seat at the same time to keep it from crashing into the dashboard.  My life didn’t flash before my eyes but what did was the thought of  having to tell my dad that I wrecked his car after getting hit by some very large birds.  Luckily, that didn’t happen.

They were hanging out in the ditch on the right side of the road and darted in front of me.  Apparently the family truckster, aka SUV, wasn’t very intimidating as they landed just on the other side of the road to my left.  Grabbed my camera and started shooting.  They were too close at 700mm so ended up taking off the teleconverter after several close-up’s.  They gradually walked further away and were the subjects for my previous silhouette post once the sun poked through the fog.

Taken with Canon 7D and Canon 500mm F4 IS II lens with 1.4x III teleconverter, handheld out the car window. 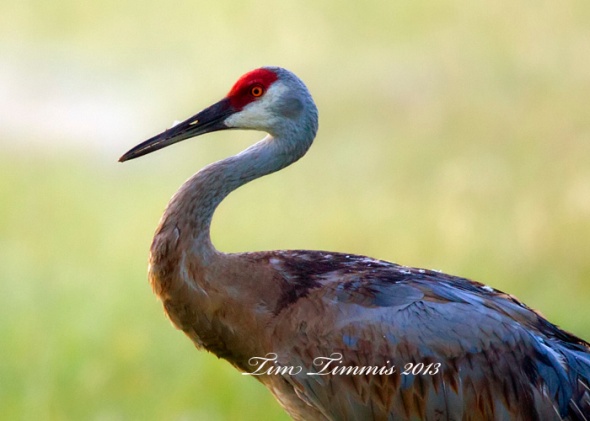 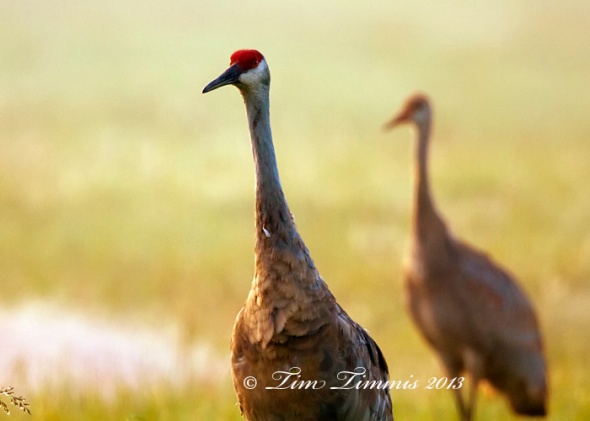 This entry was posted on October 19, 2013 by Tim Timmis. It was filed under Birds and was tagged with Canon 1.4x III, Canon 500mm F4 IS II, Canon 7D, Indiana Sandhill Cranes, Sandhill Cranes.