The past couple weeks have challenged my patience and photography skills.  Headed to Bryan Beach last weekend in search for Black Skimmers after hearing that the water was drying up in the ponds, which helps to concentrate the fish and the birds.

One of the challenges at Bryan Beach is finding a place to park without getting your car stuck in the sand, which I’ve had lots of experience with over the past few years.  With my highly functioning brain waves, ended up getting stuck in the mud instead of the sand this time.  Saw some tracks where someone else had driven across what appeared to be dried out muck from the pond so I dove in and got stuck in the “wet” muck.  While sitting in the car with wheels spinning and contemplating my options, looked towards the birds in the pond and said the heck with my car.  It wasn’t going anywhere and the birds were begging to be photographed, which turned out to be easier said than done.

Experienced some of the most challenging shooting that I’ve seen while using my 500mm lens on a ground pod.  Even with using a gimbal head, there is a very limited range of motion available while lying down on the ground when shooting flying birds.  Skimmers fly with their beaks in the water to grab fish.  The challenges included acquiring the birds in the frame with the 500mm lens, getting them in focus while flying around other birds, getting a clean foreground/background and then getting the shot before running out of room to move the lens around.  Standing up would have been much easier but the shots wouldn’t have been as good.  There were hundreds of shore birds in this small pond so trying to get an isolated shot was almost impossible.

My 7D did fairly well but had some trouble with locking the focus on the quick moving Skimmers with the busy backgrounds.  Tried using different focus point options and ended up back with what I typically use, the single center focus point.  A 1D series Canon body would have fared much better but that is another expenditure for down the road, but a good excuse to get one someday.

The first day at Bryan Beach ended up with a couple of 32 gig cards full of skimmer shots, a very stiff neck and me calling a tow truck.  Almost had to call an ambulance after nearly having a heart attack when they told me that it would cost $150 to get may car pulled out of the mud.  Luckily a good Samaritan stopped by and pulled me out before I had to sell my first-born child to get out.  There are still good people out there and I’ve met lots of them in Texas.

Went back for two more days of Skimmer photography over the holiday, so more and better photos to come.

Here is a shot that shows how congested the pond is just before sunrise. 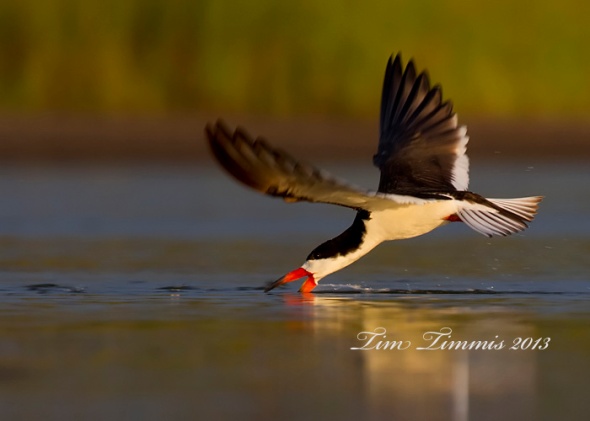 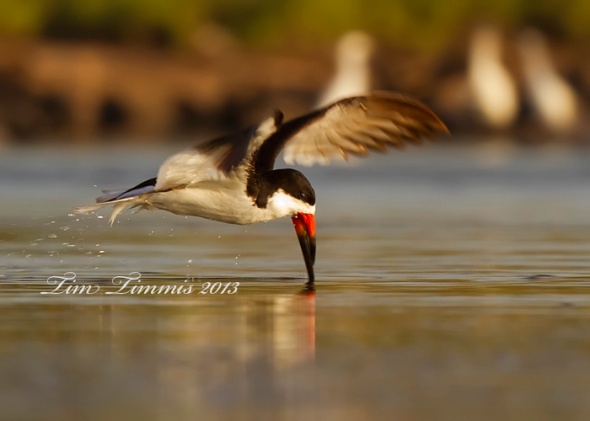 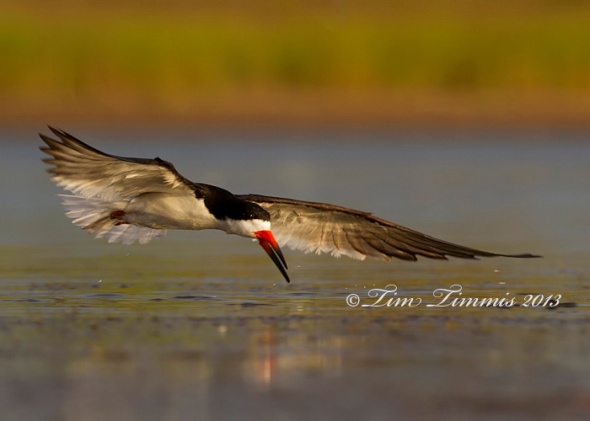 This entry was posted on July 6, 2013 by Tim Timmis. It was filed under Birds and was tagged with Black Skimmers, Bryan Beach, Canon 500mm F4 IS II, Canon 7D, Skimmer ground pod, Wimberley II.